MEET ME IN THE BATHROOM: THE ART SHOW Lizzy Goodman and Hala Matar capture the sense of “magical unrest” that came from the 2000’s rock ‘n’ roll era in New York.

This notable art show acts as a visual counterpart to Goodman’s book Meet Me in the Bathroom: Rebirth and Rock and Roll in New York City 2001-2011, turning the oral history of New York punk into a reality. Matar, director of Interpol’s “If You Really Love Nothing” music video, came up with the idea which lead the duo to create the exhibition that documents the era’s “defiant ugliness, disarray and mischief.”

The exhibition started on Sept. 4, and will be open until Sept. 22 at The Hole gallery in New York City.

Through the use of polaroids of naked bodies, smashed iPhones, memorabilia’s and over 25 works, this art show transports nostalgists to the gritty and rebellious era where freedom was found in instability and fear. The art show includes works by Rita Ackermann, Doug Aitken, Urs Fischer, Dan Colen, Nate Lowman, Rob Pruitt, and more. They are featured alongside artworks by musicians including Fischerspooner, Fabrizio Moretti of The Strokes, and Karen O and Nick Zinner of the Yeah Yeah Yeahs.

Rock bands and artists set the scene by matching their energy to the city’s and that is exactly what this art show is doing. It is unpredictable, uncensored and overwhelming in the best way possible. This exhibition feels like it came straight out of the 2000’s by embodying the era’s hedonism and wearing its “rock and roll interest with defiant pride.”

Dead, or so they would tell you. The idea of leather jacket cool – like, a traditional, archetypical notion of being in a rock band, the stylized rebels with guitars in someone’s garage, that was supposed to be over and never coming back. If you wanted to play guitar  (and really, you should want to play keyboards and be making dance music) you would at least have the good sense to do it in a coolly lo-fi middle American city, ideally somewhere in Ohio. A pouty, glamorous punk rock band from a big eastern city seemed like a bad idea to the point of being self-hating.

What was the genesis of the 2000’s New York rock revival? Which artists set the scene?

The Strokes were the first to break out. And their instant phenomenon status in the UK pretty much immediately broke the door down for their immediate peers from NY like Interpol and Yeah Yeah Yeahs. Then came the search for ideologically similar bands from around the world – the Killers from Vegas, the Hives from Sweden, the Vines from Australia, the White Stripes from Detroit and of course the Kings of Leon from Tennessee. But it’s important to note that there were a couple other important bands who were around New York just before and during the Strokes’ inception, like the Mooney Suzuki and the Realistics. The Mooney Suzuki were the coolest rock band in New York and they sort of showed people that you had to wear your rock and roll interest with defiant pride, even if every record company was telling you this was a dead end. They were wild, they were a little dangerous, their shows were sweaty and dirty and exhilarating. Their energy matched the city’s, and, among others, set the stage for everyone else to do the same.

Was there a common socioeconomic background among artists?

Not really. This whole idea that the scene was full of rich kids gets a lot of play, but it really was a mix. There were a lot of kids who come from especially cultural privilege – ie, maybe not a whole lot of money, but grew up in families who cared about books and films and museums. There was a common cultural savviness, I’d say, to a lot of the kids in these bands. I felt, when I first started going to these shows and hanging out with these people, like I was taking a lot of notes and trying to keep up. But it wasn’t a bunch of kids with expensive, pristine guitars in fancy lofts paid for by their parents. Everyone’s apartments were fucking disgusting and smelled like boy. Speaking of boys, the thing we should talk about, as much as privilege, is why there weren’t more women in this scene, and why there aren’t more women in general who feel like our collective music culture gives them permission to pursue the grittiness, emotional/sexual freedom, and all around truly punk rock spirit of their male peers.

What was the nexus of the movement? What were the themes, sounds, etc. shared among the artists?

I’ve summarized is as a sense of willful joy in the face of fear and unease. 9/11 had just happened, the city had been attacked, adults were freaking out, the cool creative industry you thought you might want to get a toe hold in was changing over night because of the internet revolution. The world generally felt pretty unstable, and when you’re young and you have in mind a certain image of what your youth is supposed to look like – of the stable adult world you’re supposed to get the chance to rebel against – it’s a weirdly anxiety that takes over. That anxiety was handled for a lot of us by going to Bar 13 and drinking tequila and dancing to the Easybeats and the Kinks and the Standelles.

Are there any parallels to this movement and the 1970’s punk scene?

Yes.
How easily did these New York artists break onto the airwaves?

This wasn’t much of a radio scene. I mean, most of these bands did have moments of crossing over into mainstream radio, and obviously later the Killers and Kings of Leon particularly have become the sort of definitive grown up rock bands of this era, but I think part of why there’s such an enduring interest in this age is that it as big as it all got, it never got that big. Everything still felt genuinely subcultural. Cloistered. Intimate. And as a result: genuinely meaningful. When you go see these bands play today, it’s still like that. I love that.

What was the role of drug use in the scene? What drugs were people using?

There were a lot of drugs. Whatever you’re imagining probably isn’t far off.

If you had to list a single, quintessential album that personified the age, what would it be?

Ha! I would never choose between my children that way. I have always said that for me personally, the first Strokes EP, The Modern Age EP, and Yeah Yeah Yeahs’ debut album,Fever to Tell, are the records from this era that just destroyed me, in that way where I felt my DNA change because of them. I was different after they got to me.

The name of the show is Me in the Bathroom: Rebirth and Rock and Roll in New York City 2001-2011. What’s the origin of that title?

Gotta thank the Strokes for that one. “Meet Me in the Bathroom” is one of my favorite Strokes songs, and I always thought it was pretty evocative. Also have to shout out to the late great Marc Spitz, journalist and chronicler of much of this scene, who told me one day over breakfast, before I’d even finished the proposal: “you should call it Meet Me in the Bathroom.” Thanks, Spitz.

Where did the idea for this show, and your interest in this type of music generally, stem from?

Well, the show was my co-curator Hala Matar’s idea, and I’m so grateful she stuck with me as we worked through all the initial back and forth about how to actually make this real. As for my interest in this music: I was a stealthily weird kid, I needed to meet other weirdoes.

What was the process like getting all of these acclaimed artists to contribute to the show? Grueling. Exhilarating. Humbling.

As we can see in the exhibit, many of the musicians from the 2000’s scene have diverse artistic abilities and interests. Why do you think that is?

I don’t necessarily think it’s specific to this era. Musicians are pretty amazing, across the board, I’ve found. In my experience, most musicians have a lot of broad cultural interests and abilities. Not always but often. The amount of amazing recommendations about books and films and even restaurants I’ve gotten from people I’ve interviewed is pretty mind boggling.

What is the main aspect of the 2000’s punk scene you wanted to capture with the show?

A sense of magical unrest. This was an era in which things felt unstable in a super inspiring way. You felt called to seek out a certain kind of defiant ugliness, disarray, and mischief. Every night felt like an opportunity to make something happen. To let it pass you by without showing up for whatever alchemic magic the city had on offer would be a kind of offense, a slight to the gods and goddesses of youth and abandon. It was really fun. And now feels like a good time to remember fun. 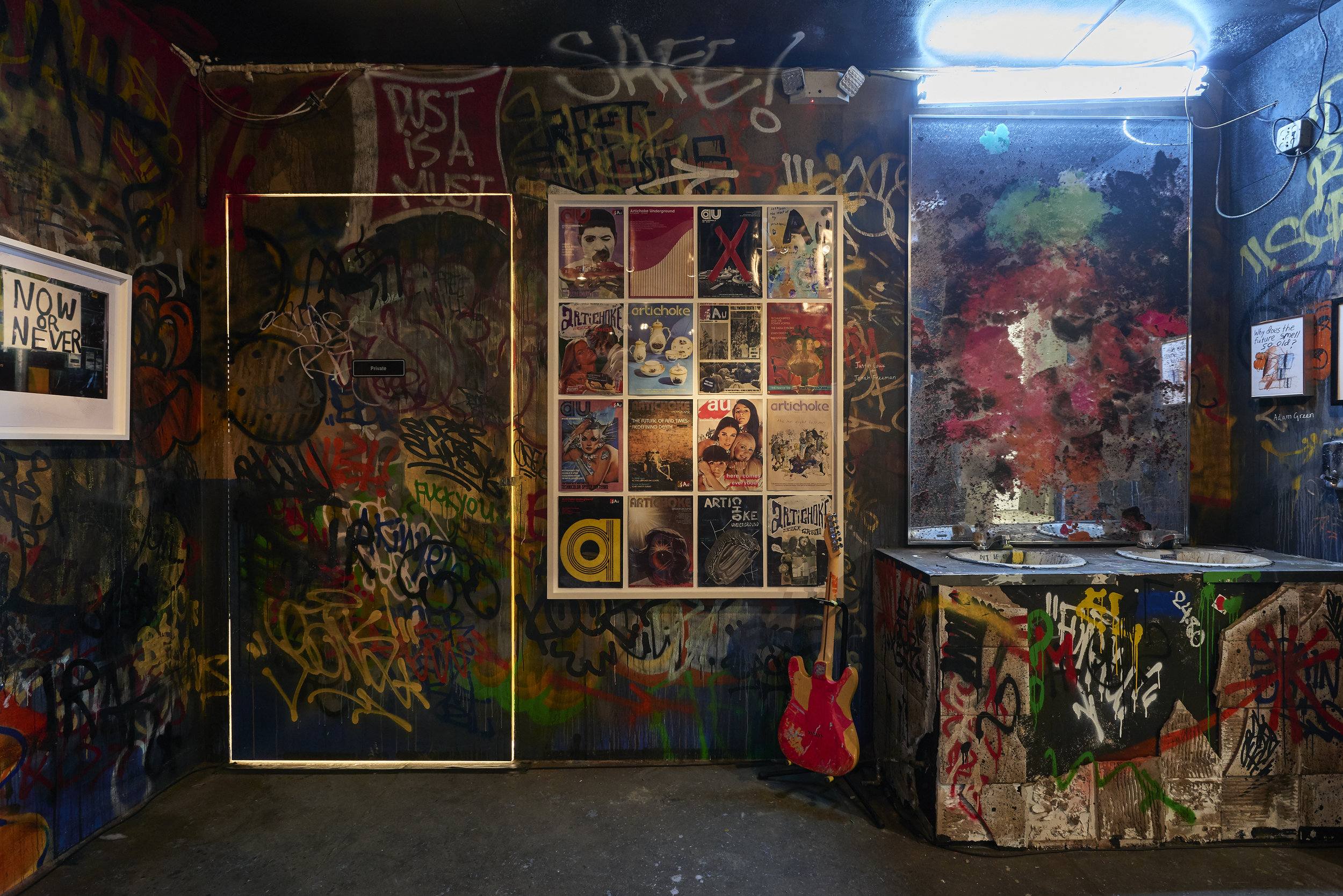 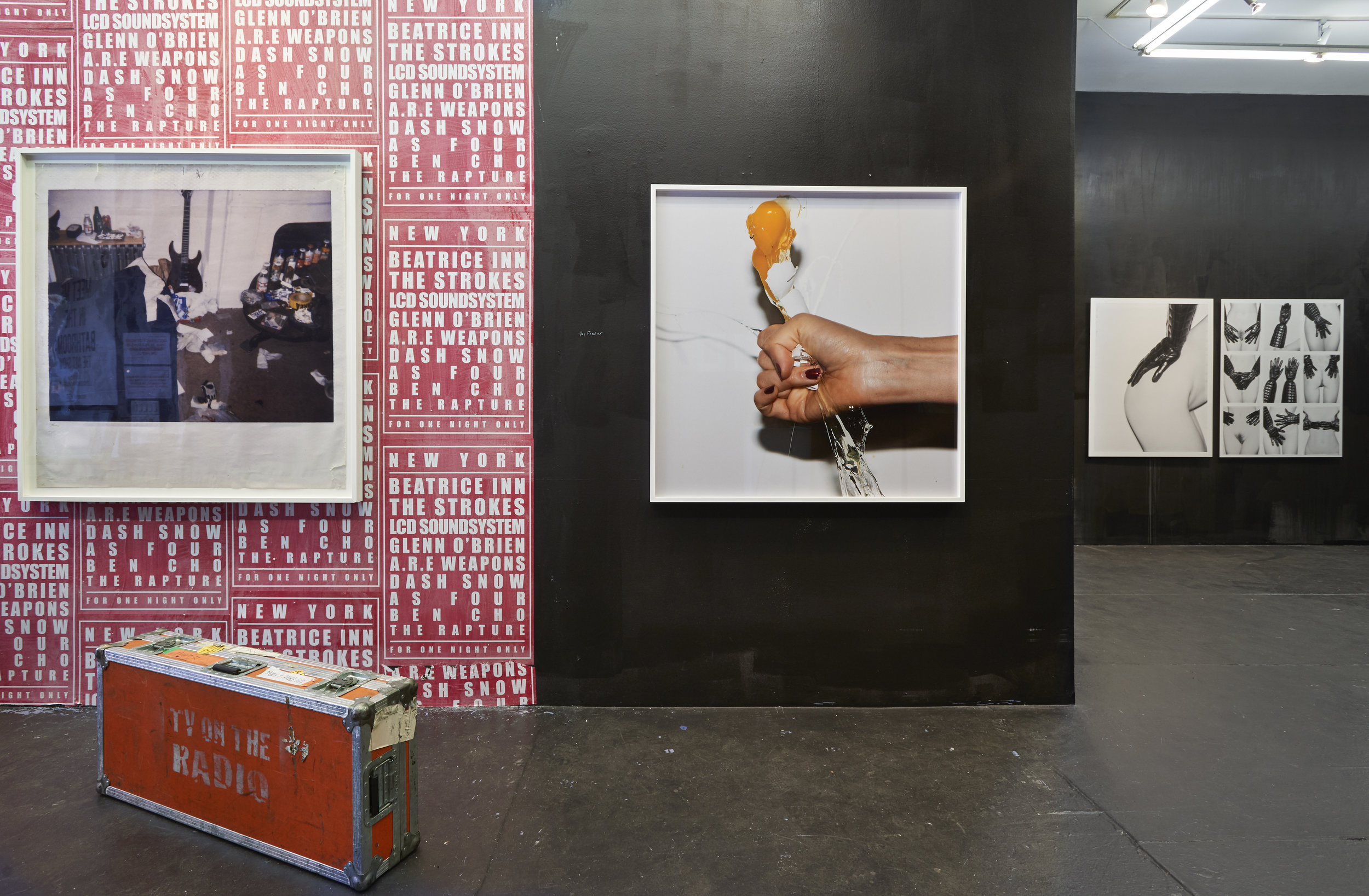 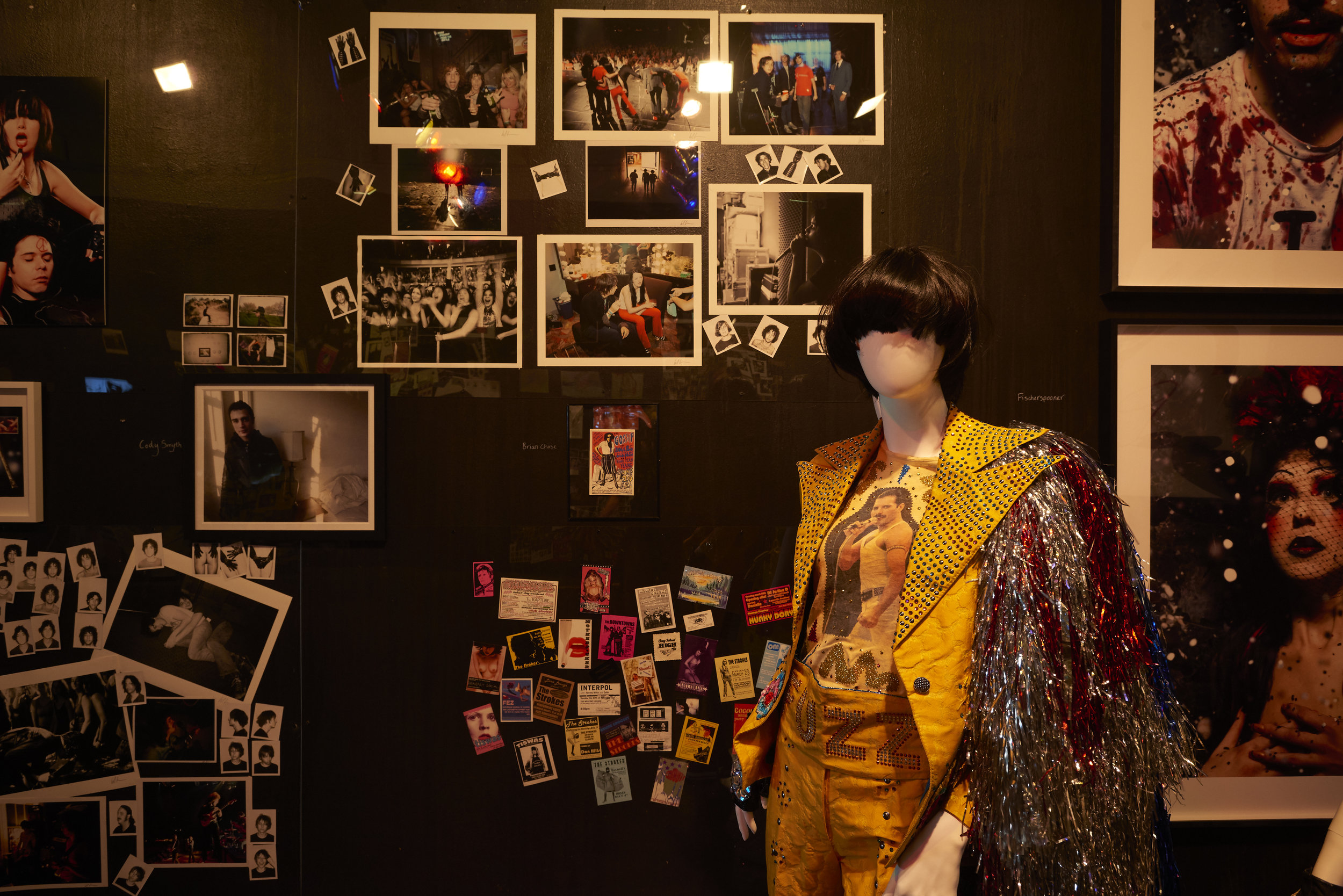 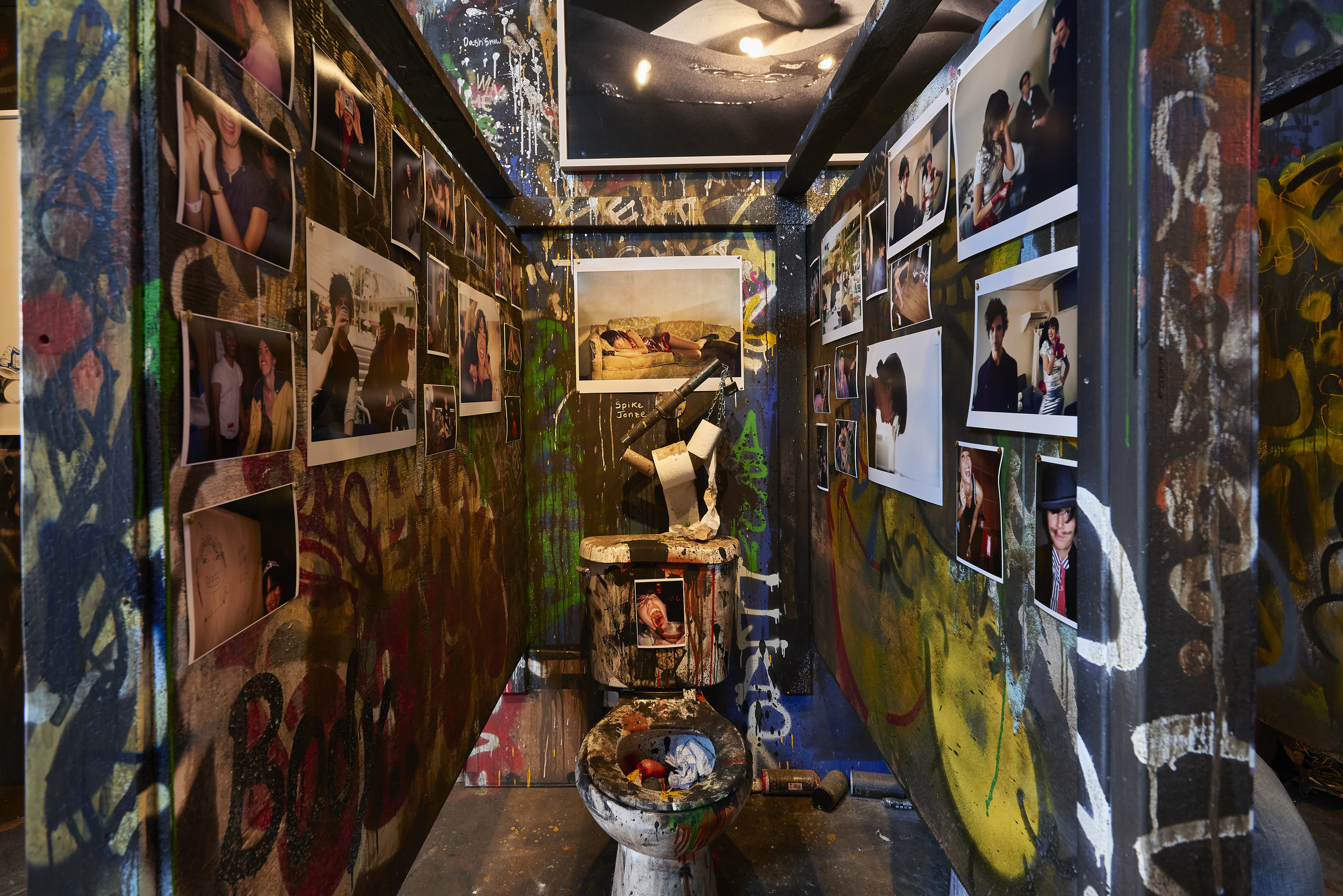 The exhibition is curated by Lizzy Goodman and Hala Matar, organized by The Hole and UTA Artist Space, and presented by Vans. Signed, limited edition prints are available here via Absolut Art.