‘Meet Me in the Bathroom’: An Art Show of Stuff From Under Musicians’ Beds

An exhibition, curated by Lizzy Goodman and Hala Matar, will bring you back to the aughts and make you feel “a little unsafe, a little unsure.”
By Fahima Haque Hala Matar, left, and Lizzy Goodman, who curated “Meet Me in the Bathroom,” at the Hole gallery in the East Village, with Dan Colen’s “This Isn’t So Dark” 2010, background top, and Rob Pruitt’s “Studio Loveseat (Xtra Long),” 2015.CreditCreditJoel Barhamand for The New York Times

Lizzy Goodman and Hala Matar fondly describe the rock that came out of New York in the 2000s as unserious and beautifully ugly. Their joy is not only palpable — it’s contagious. And their belief in the power of musicians is reflected in their work: In 2017, Goodman wrote “Meet Me in the Bathroom: Rebirth and Rock and Roll in New York City 2001-2011,” and Matar directed Interpol’s “If You Really Love Nothing” music video the following year.

Now they have curated “Meet Me in the Bathroom: The Art Show,” a visual counterpart to the book. The exhibition opened Sept. 4, and runs through Sept. 22 at the Hole art gallery in the East Village.

Ms. Goodman’s oral history, which chronicled the resurgence of rock in the East Village and the Lower East Side in the 2000s, was broadly praised for its intimate portrayal of bands like the Strokes, the Yeah Yeah Yeahs, LCD Soundsystem and Interpol. The art show features more than 70 works from some of those musicians, including Karen O of the Yeah Yeah Yeahs, Paul Banks of Interpol, Tunde Adebimpe of TV on the Radio and Adam Green of the Moldy Peaches. The show also features work from the artists Aurel Schmidt, Rita Ackermann, Urs Fischer, Rob Pruitt and Ryan McGinley.

Stay on top of the latest in pop and jazz with reviews, interviews, podcasts and more from The New York Times music critics.

Karen O’s microphones — still wrapped in duct tape adorned with her colorful doodles — are on display, as well as her pepperoni pizza dress and other outrageous stage outfits by the costume designer Christian Joy. There’s also a guitar belonging to Dave Sitek of TV on the Radio. One room is dedicated to memorabilia, a collaged frenzy rewarding fandom and voyeurism with photos sourced from the bands themselves, magazine covers from the early aughts and more original artwork. Another room recreates the famous stank bathrooms from the now-closed dive bar, the Hole, which the gallery is named after, replete with graffiti from Ben Solomon, Shaun Crawford and the Irak crew.

Lesley Silverman, of United Talent Agency’s fine arts division, which helped Ms. Matar and Ms. Goodman organize the exhibition, called the show “an altar.” The New York Times recently spoke with Ms. Goodman and Ms. Matar about the opening. These are edited excerpts from the conversation.

How did you source the show?

HALA MATAR We had to contact the record labels. We worked with photographers who went on tour with the bands, and then we also have some personal photos by the bands themselves, like Nick Zinner’s [of the Yeah Yeah Yeahs].

LIZZY GOODMAN We just went to Paul Banks’s apartment. Really, it’s stuff from under people’s beds — that idea of having work that feels personal mixed with work that’s been shown in museums and has this sense of formality to it. And it’s been positioned in a different way in its history. Blending that is part of the idea.

MATAR There was a bar called the Hole, and a lot of the artists hung out there and this gallery is called the Hole. We tried to recreate the environment of that bar and that experience.

GOODMAN It’s really good to cast a wide net and be ambitious. But I think we both feel this huge responsibility to get it right and to not play fast and loose with the legacy of this time.

What did you hope to accomplish with the show?

GOODMAN I want you to feel a little unsafe, a little unsure. What is this? Is this a gallery show? Is it a rock show? Is this 20 different girls’ bedrooms in here? Is this some sort of weird, rock-obsessed serial killer living in here? Like what is going on here? That sense of unease is the word we talked about. 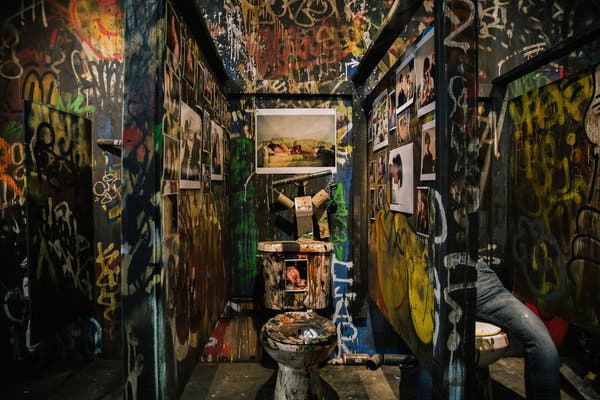 MATAR We tried to show work that evokes the feeling of that time. Some pieces are a bit violent; some pieces make you feel that unease. The artists were also having fun, creating pieces from their ideas, not knowing if they’ll turn into masterpieces.

You two met at a dinner around the time the book came out. How did you all decide to turn this project into a show?

MATAR It felt obvious to me.

GOODMAN First of all, I was like I don’t want to make anything ever again. I wrote it, I’m going to bed — see you all in a couple of years. I just felt like the idea of undertaking something else that would require genuine creative and emotional bandwidth was sort of hard for me to even get excited about. But then I slept for a while. [Hala] kept after me in the best way.

Considering the dearth of women on the scene at the time, there’s something special about the fact that two women are curating this show. Have you discussed that?

GOODMAN I’m thinking about that all the time about pretty much every creative decision that I’m making, not just about women but underrepresented parties, whatever that is. It’s our view; our lens is what you’re seeing. This is our idea; this is this book that I wrote. It’s Hala’s vision for the show, it’s Kathy Grayson’s gallery, inspired by the Hole. None of this is constructed as consciously gendered in the sense of ‘let’s empower women’; it’s just what happened with all of us.